In honor of the festivities marking the 70th anniversary of the creation and revival of the State of Israel, Jforum proposes a historical survey of Israel. First let’s dive into the traditional sources of Zionism.

According to the Torah, in the Book of Genesis, Abraham, the first patriarch of Judaism and monotheism received the divine command to leave his homeland and leave (Lekh Lekha) to the land of Canaan (Eretz Israel).

It was a founding act. The prophet Moses saw the confines of the Land of Israel without being able to enter it. Saul became the first king of Israel, quickly deposed for the benefit of David nicknamed “king warrior-poet”. Solomon built the Temple and the Royal Palace in Jerusalem.

Since the First Exile, in -586 of the common era, the Jews through the prophets expressed in their prayers their desire to return to Zion. Psalm 137 is the most famous prayer praising the return of the exiles of Babylon:

1 And on the banks of the rivers of Babylon we sat down, and wept for the memory of Zion. At the willows which border them, we hung up our harps; 3 For there our masters asked us for hymns, our oppressors for songs of joy. “Sing us [say they], one of the songs of Zion!” 4 How would we sing the hymn of the Lord in a foreign land? 5 If I never forget you, Jerusalem, let my right hand deny me his service! 6 May my tongue be attached to my palace, if I do not always remember you, if I do not place Jerusalem at the top of all my joys! 7 Remember, Lord, for the loss of the sons of Edom, of the [fatal] day of Jerusalem, where they said, “Break it down, and tear it to the ground.” 8 Daughter of Babel, doomed to ruin, happy who will repay you for the harm you have done to us! 9 Happy that will seize your little ones and break them against the rock!

Despite the destruction of the Second Temple and Jerusalem, in the first century, by the Roman armies of Titus and Hadrian, the Jewish presence has never disappeared from the ancient Jewish kingdom: 4 Jewish cities set this establishment in Jerusalem, Tiberias, Safed and Hevron.

We can recall, over the centuries, the names of Ezra, Hillel, Judah Halevi, Yehiel of Paris, Nahmanide or the Gaon of Vilna.

Thus very young, Judah Halévy travels Spain in prey to wars between Christians and Almoravides. He goes down to the country of al-Andalus to complete his studies.

He wins a poetry competition in Cordoba, then meets in Granada the Sephardic poets Moise ibn Ezra and Abraham ibn Ezra, with whom he will be bound his life.

Yehuda Halevi resumed his travels, visited the Jewish vizier Meir ibn Kamniel in Seville and the Talmudic master Joseph ibn Migash in Lucene. He practiced medicine in Toledo, then became a Christian, leaving in 1109 with his friend Abraham ibn Ezra. They then continue their travels through Muslim Spain (Cordoba) and North Africa.

Supporter of the return to Zion, Yehuda Halevi arrived in Alexandria, then Cairo where he died in 1141 before being able to embark for Palestine under Muslim rule. Legend has him dying at the gates of Jerusalem under the hooves of an Arab horseman. 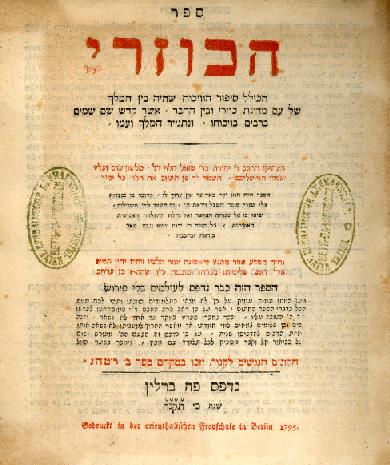 He is also the author of elegies, grouped under the name of “Sionides”, some of which are included in the traditional liturgy of 9 av, which commemorates the fall of the Temple of Jerusalem.

My heart is in the East, and I am at the end of the West;

How can I taste what I eat and how could it be nice for me? How will I fulfill my vows and my obligations, while yet Zion is under the chains of Edom, and I am in the chains of Arabia? It would be easy for me to leave all the riches of Spain – As it is precious for me to see the dust of the sanctuary sorry Zion – you are anxious news of your captives

“Zion, you are probably worried about the news of your captives; they ask after you, those who are the rest of your flock. From West and East and from North and South, from near or far; bring peace on all sides.

And peace is the desire of the captive, who gives her tears like dew on Hermon and longs for the day, they will fall on your hills. I am a grieving person who cries for your poverty and when I dream of return I am the accompaniment to your songs.

Rav Yehiel Ben Joseph was born in Meaux, a little more than 750 years ago, and died in Haifa, in the Land of Israel, in 1286.

Disciple of Rabbi Judah ben Isaac (Sire Leon of Paris), he succeeds him at the head of his yeshiva in 1225, rich of 300 students, some of whom will become famous Tossafists, like Rabbi Meir of Rothenburg.

The situation is precarious, both because of the Crusades and the poverty of students, Yehiel of Paris must send a delegation to countries where the situation is more comfortable for Jews.

In 1240, King Louis IX, Saint Louis, ordered the holding of a religious dispute between supporters of Judaism and Christianity about the Talmud.

Yehiel from Paris represents the Jews. His opponent is an apostate Jew named Nicolas Donin. Although Yehiel wins the dispute with flying colors, as well as the admiration of the rulers and notables of the kingdom, the climate of anti-Jewish hatred is so intense, that the public cremation of every copy of the Talmud is ordered. can find.

Finally, 24 cartoons of talmudic treatises will be delivered to the flames. Yehiel of Paris continued to teach the Talmud, writing

Tossafot, establishing halachic decrees, etc. However, the atmosphere soon becomes untenable, and he embarks for the Land of Israel with many of his followers.

He died there and was buried in Haifa, near Mount Carmel.

Jerusalem at the time of Nahmanide

The Mamluk Sultanate, established in 1250 against the crossed army which, under the command of Louis IX of France, marches on Cairo, now controls Syria-Palestine and the rest of the Islamic empire built by Saladin; the agreements made with the Franks are then repealed.

In 1291 the Mamluks killed the last kingdom of the Crusaders. These former freed slaves dominate Jerusalem until 1488.

The Mamluks are continually in internal struggle for power in Egypt, and they must defend Syria against the Mongol hordes. They do not have much time to devote to Palestine, neglected by the great political empires.

During this period, Jerusalem is in decline: its population is reduced by successive looting and massacres – especially since a new Mongol invasion in 1260 led to the flight of the inhabitants – and Palestine does not occupy an important place within the vast empire of Islam. The robberies and raids also ravage farmland, abandoned.

Thus in the fourteenth and fifteenth centuries, Jerusalem once again becomes a provincial city that retains an important intellectual and cultural influence; city ​​of pilgrims and scholars, it also welcomes political exiles.

As for the Jewish presence in Jerusalem, it never disappeared and will take a new vigor in the 13th century after the arrival of the Spanish rabbi Nahmanide nicknamed Ramban. 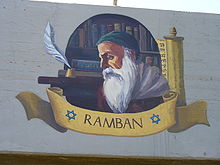 Ramban fleeing the persecutions of the kings of Spain arrives in Jerusalem in 1267 at the age of 73 years.

In a letter to his son, he says he finds only two Jews, brothers and dyers. All three see a ruined house with marble pillars and a beautiful dome, they make it a synagogue. They bring from Shechem, Nablus, the scrolls of the Law, transported there during the Tartar invasion. During the last three years of Ramban’s life, his synagogue is the meeting place of the Jewish community, decimated since the cross-massacre of 1099.

Nahmanides preaches for the Jews the obligation to live in the land of Israel (Palestine of the time). It is to awaken the interest for the biblical texts among the few Jews who live there that Nahmanide writes the commentary on the Torah.

The Jewish community begins to focus in the current Jewish neighborhood, located southwest of the Temple Mount.

From 1267 to 1483, the Jewish population of Jerusalem rose to five hundred people for a total population estimated at three thousand inhabitants. The Jewish community now includes Spanish exiles and immigrants from Central Europe. It flourished until the end of the 15th century, despite friction with the Ottoman authorities on tolls, capitation and the use of synagogues.

In 1488, Rabbi Obadia of Bertinoro (1450-1510), the famous exegete of the Mishna arrives in Jerusalem, he becomes the spiritual leader and leaves this description: “But what should I tell you about this country? Great is the loneliness and great are the losses and, to describe this briefly, the more the places are sacred, the greater their desolation! Jerusalem is more desolate than the rest of the country [1]. ”

During this period, Jerusalem is the scene of recurring violence, linked to conflicts over the attribution of this or that site to this or that religion. Félix Fabri, a German Dominican friar and pilgrim in Jerusalem, explains at the end of the 15th century that disputes are more about consecrated spaces – the site of the Temple and the Holy Sepulcher – than about the question of sovereignty over the city.

In this now predominantly Muslim city – out of ten thousand inhabitants, it is estimated that in the fifteenth century Jerusalem has about one thousand Christians and five hundred Jews – persecution and vexation are not uncommon to non-Muslims, and places of worship are regularly ransacked. All period accounts agree on the “sorry” aspect that the Holy City offers in the Mamluk era.

The historian Mujir al-Din who lives in the Holy City almost all his life, leaves a description in the 15th century, he explains that, like other Islamic cities, Jerusalem is divided into neighborhoods.

Muslim theologians create many religious schools, called madrasas. Al-Aksa and the Dome of the Rock are restored and embellished. Christian architecture declines, because subject to expensive permits. Non-Muslims are frequently persecuted.

Muslim fanatics demolish the church of St. Mary of the Germans, built on the supposed site of the house of Mary, mother of Jesus. And the Holy Sepulcher is once again devastated.

In 1342, the Mamluks allowed the Friars Minor to settle there. Pilgrimages can resume. It is at this time that many Christian traditions related to the life of Jesus are established, including that of the Via Dolorosa which is marked by fourteen stations, on the site of the current convent of the Flagellation where Jesus was flogged by the soldiers and he was crowned with the head of thorns. The Way of the Cross of Christ becomes sacred for Christians.

1739: Alya of Rabbi Chaim Ben Attar, famous Rav of Morocco, known as Or Ha Chaim and author of a commentary of the Torah of the same name. His personal tribulations make him aware that the Jews have no other place than Eretz Israel.

1817: Rabbi Shmuel Abbou rises from Algeria to Eretz Israel. Honorary Consul of France, he helps to acquire land Rosh Pina, one of the first settlements founded by Jews in contemporary times, in 1887

(To be continued) Adaptation by JG