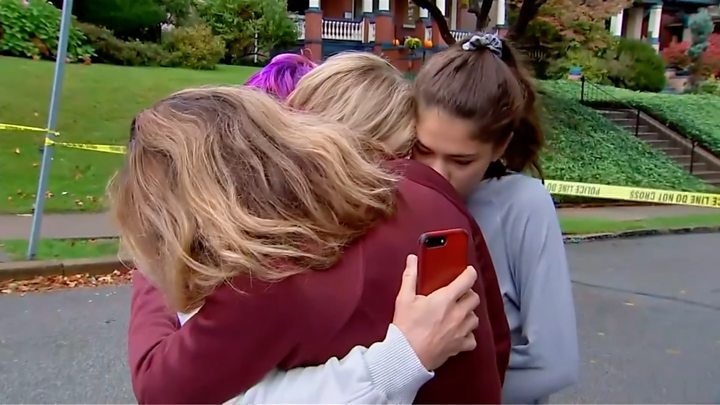 “It’s a horrific crime scene. One of the worst, and I’ve been on plane crashes”

Eleven people have been killed, officials say, in a gun attack on a synagogue in the US city of Pittsburgh, Pennsylvania.

The gunman, who opened fire as the Tree of Life synagogue held a service, was later taken into custody.

President Donald Trump said “a lot of people” had been killed and injured in a “wicked act of mass murder”.

The suspect, who has been officially identified as Robert Bowers, 46, was injured and is receiving treatment.

Two other people are in hospital in a critical condition, police said.

Federal investigators are treating the shooting as a hate crime.

The Anti-Defamation League, a Jewish non-governmental organisation that fights anti-Semitism, said: “We believe this is the deadliest attack on the Jewish community in the history of the United States.” 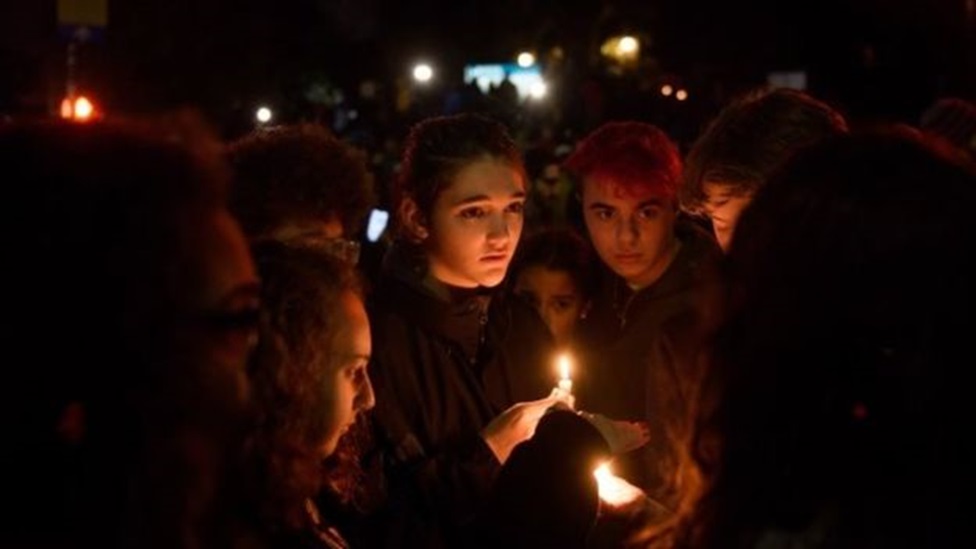 People lit candles as they mourned the victims of the attack

Hundreds of people – from the neighbourhood and also all across Pittsburgh – later gathered for an interfaith vigil for the victims of the attack in Squirrel Hill.

Sophia Levin, a local resident and one of the organisers, told the BBC some people were “really sad” and the mood was “heavy”.

But she added that people also wanted to be “together, not alone”, and the vigil would help heal the city.

President Trump said he would visit Pittsburgh, following the attack.

How did the shooting unfold?

On Saturday morning, worshippers had gathered at the synagogue, in the Squirrel Hill neighbourhood, for a baby naming ceremony during the Sabbath.

Squirrel Hill has one of the largest Jewish populations in Pennsylvania and this would have been the synagogue’s busiest day of the week.

According to reports Mr Bowers, a white male, entered the building armed with an assault rifle and two pistols. 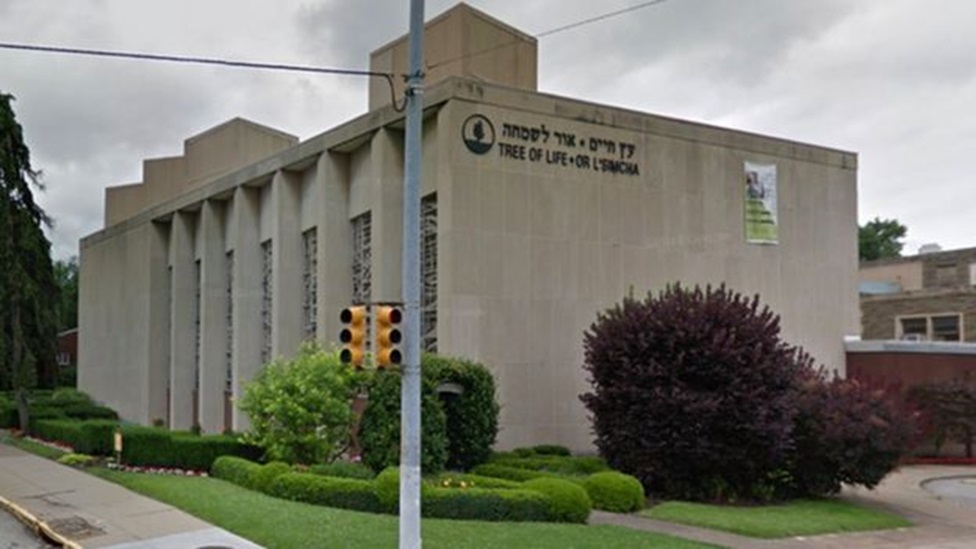 The Tree of Life Congregation Synagogue in Pittsburgh

Reports say he barricaded himself in a room at the synagogue when police approached.

Emergency services arrived at the building at about 10:00 local time (14:00 GMT), and gunshots could be heard.

Pittsburgh’s Public Safety Director Wendell Hissrich later confirmed Mr Bowers was in police custody and was being treated in hospital.

The crime scene was “horrific”, he told reporters. “One of the worst I’ve seen, and I’ve [worked] on some plane crashes. It’s very bad,” he added. 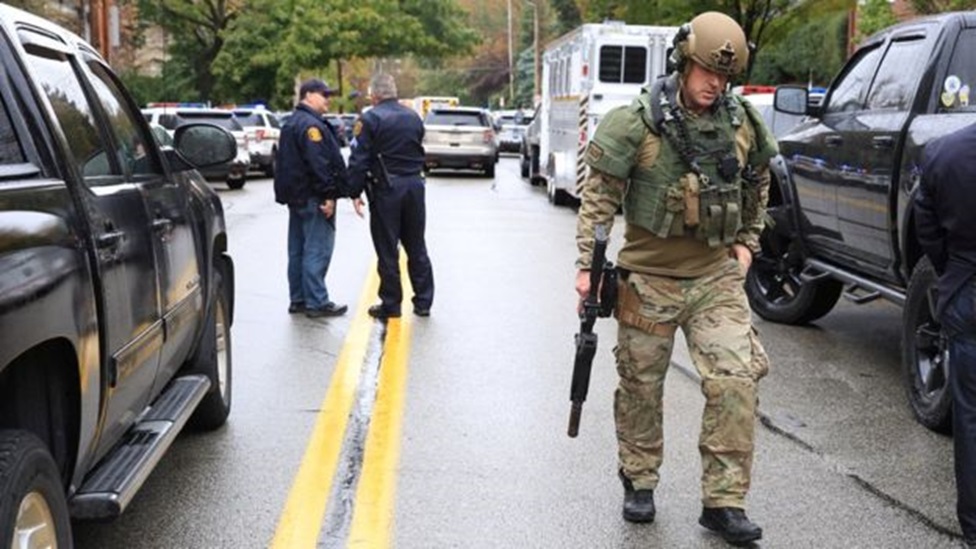 Officers cordon off the area outside the synagogue

He said that two officers were injured in an “initial confrontation” and that a further two Swat officers were later hurt by the gunman when they entered the building. He said that no children were among the casualties.

What do we know about the gunman?

US media said he had shouted “All Jews must die” as he carried out the attack.

Social media posts by someone with the name Robert Bowers were also reported to be full of anti-Semitic comments. 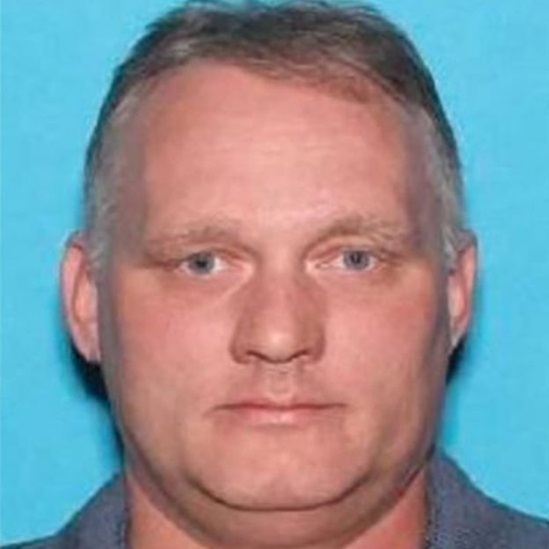 Pittsburgh FBI’s special agent in charge of the investigation, Bob Jones, told a press conference that Mr Bowers did not appear to be known to authorities prior to events on Saturday.

He said that any motive remains unknown but that authorities believe he was acting alone.

Mr Jones added that the investigation was “in the early stages”. “We will look at every aspect of the suspect’s life,” he said.

Mr Bowers is receiving treatment for what has been described as multiple gunshot wounds.

In the dwindling light, and with the cold autumn rain falling, hundreds gathered in front of the 6th Presbyterian church just a few streets away from the Tree of Life Synagogue.

Holding their candles, they sang the Jewish prayer of healing.

The elders in the community had wanted to wait a day before holding the vigil, but the young people said no – they wanted an immediate chance to share their grief and voice their hurt.

Fifteen-year-old Sophia Levin declared that she was a different Jew today to the one she was yesterday. Anti-Semitism, she said, had been something she thought happened elsewhere and in earlier times; but now she knew it was right here, right now.

Some of these young people have been involved in the student gun control movement that sprang up after the Parkland shooting earlier this year.

One of them, Rebecca Glickman, told the crowd that gun control was needed now more than ever.

What has been President Trump’s reaction?

He called the shooting a “terrible, terrible thing”.

“To see this happen again and again, for so many years, it’s just a shame,” he told reporters on Saturday.

He described the gunman as a “maniac” and suggested the US should “stiffen up our laws of the death penalty”.

“These people should pay the ultimate price. This has to stop,” he said.

Later on Saturday, Mr Trump appeared at the Future Farmers of America Convention in Indianapolis, saying: “There must be no tolerance for anti-Semitism. It must be condemned and confronted everywhere and anywhere it appears.”

Speaking to reporters after the event, Mr Trump said the attacker was not one of his supporters, describing him as “sick”. 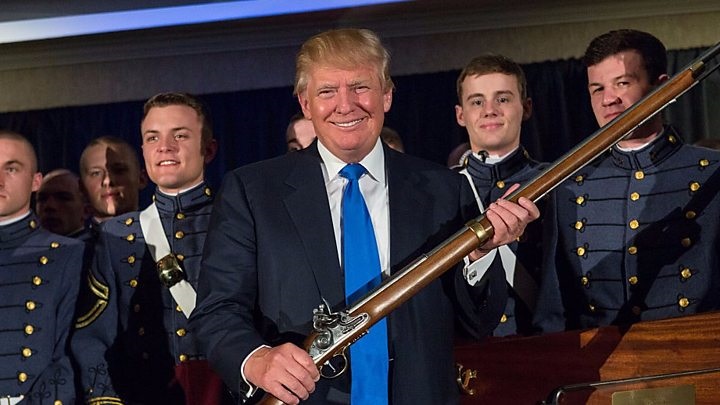 Mr Trump has also said that the incident had “little to do” with US gun laws. “If they had protection inside, maybe it could have been a different situation.”

Former US President Barack Obama voiced a different position on the ongoing gun law debate, tweeting: “We have to stop making it so easy for those who want to harm the innocent to get their hands on a gun.”

We grieve for the Americans murdered in Pittsburgh. All of us have to fight the rise of anti-Semitism and hateful rhetoric against those who look, love, or pray differently. And we have to stop making it so easy for those who want to harm the innocent to get their hands on a gun.

206K people are talking about this

What about other reaction?

Pennsylvania Governor Tom Wolf said in a statement that the incident was an “absolute tragedy” and that such acts of violence could not be accepted as “normal”.

He said: “These senseless acts of violence are not who we are as Americans.

“My thoughts right now are focused on the victims, their families and making sure law enforcement has every resource they need.”

The president of the Jewish Federation of Greater Pittsburgh, Jeff Finkelstein, said his “heart goes out to all these families”.

Other world leaders to condemn the attack include Israeli Prime Minister Benjamin Netanyahu, who said he was “heartbroken and appalled”.

“We stand together with the American people in the face of this horrendous anti-Semitic brutality,” he said in a video message.

UK Prime Minister Theresa May said she was “shocked” by the attack.

“Our thoughts are with the Jewish community in Pittsburgh and all those affected by this sickening and cowardly act,” she said.

German Chancellor Angela Merkel said: “We all have to stand up against anti-Semitism, everywhere.”

The New York Police Department said it had deployed officers to synagogues throughout the city as a precaution. 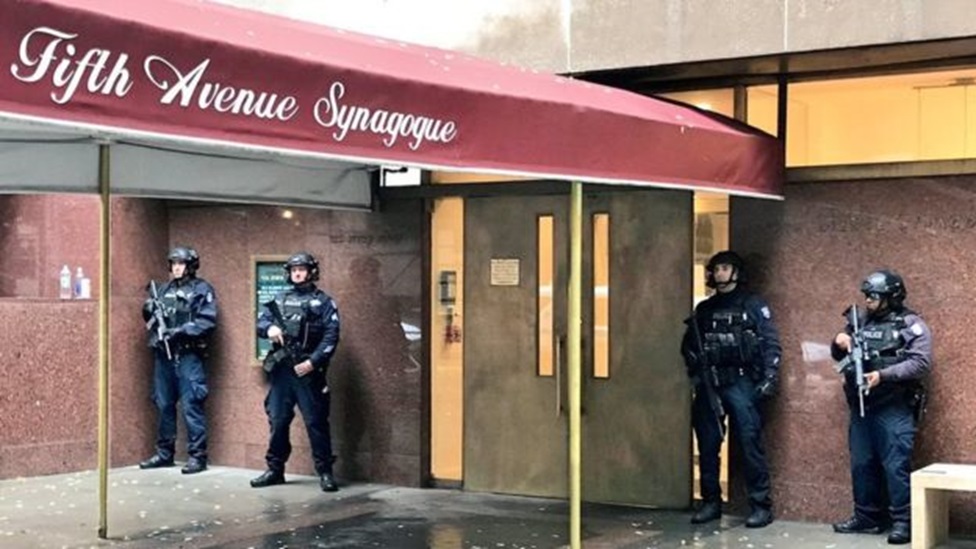 The BBC’s Dan Johnson in Washington says the shootings come at a tense time in the US, after a week in which mail bombs were sent to critics of Mr Trump, ahead of crucial mid-term elections next month.